Hi. We’re Head. How’s it going? We’re from Seattle. We’ve been kicking around the hardscrabble streets of Queen Anne Hill since 1990. Head consists of Ree Ree on Bass/Vocals, Touch on Guitar and Tulu on Drums. The Giggles was a full time member of the band up until 1999 when he got his head screwed on straight and went into the Head Army Reserves. We’ve put out several records on our imprint Evil Clown Records as well as records on Steve Priest Fan Club, Regal Select and Goner.
We average about 3 or 4 shows a year. 2011 we played 2 shows. Looks like 2012 will be more than that. I’ll believe it when I see it. 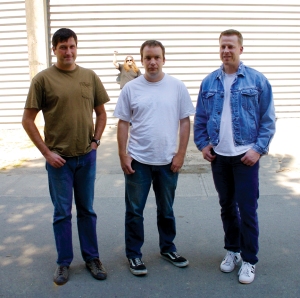